“If you learn to be content, you are rich in spirit!” 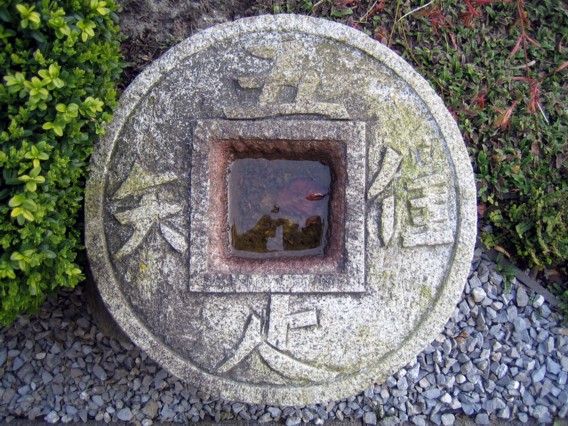 This chouzubachi is a so called shizenseki chouzubachi (made of natural stone) and a look alike of the one found in the Ryoan-ji temple garden at Kyõto. The shape was based on an old-fashioned Chinese coin, a circle representing heaven (yang), pierced by a square hole representing earth (yin)  [3]. The original is said to have been contributed by Mitsukuni Tokugawa (1628-1700), a feudal lord and the compiler of the great History of Japan known as “Dainippon-shi”.

Viewed from above, the water basin has a fascinating inscription. Read clockwise from the left side, the characters mean: arrow, five, short-tailed bird. The fourth and last character, at the bottom, has no meaning on its own, and that is the clue. In combination with the square opening of the basin, it forms the character for sufficient. In fact, the mouth of the basin is an integral part of the inscription. Each character combines with it to form a completely different one.

The inscription of kanji combined with the square opening of the basin: Ware Tada Shiru Taru also seen as Ware Tada Taru wo Shiru. Roughly translated, this means “I know only satisfaction” or “I am content with what I have” or “I alone know I am content with things”. The text is now found often on water basins in Japan. This is a Zen saying that can also be interpreted as: “If you learn to be content, you are rich in spirit!” or “I learn only to be contented”. He who learns only to be contented is spiritually rich, while the one who does not learn to be contented is spiritually poor even if he is materially wealthy. This is an important concept in Zen philosophy, knowledge for its own sake is sufficient. A person who learns to become content is rich in spirit, even if not in material terms. The more you think about it, the deeper its meaning becomes. Just like the rock garden, if all you can see is a pile of rubble, you have missed the point.