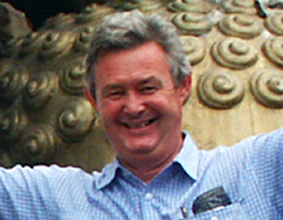 Imperial Gardens Landscape is one of Australia’s premier Oriental garden design companies.  Ken Lamb – it’s founder and chief designer – has over 30 years of experience specialising in the design, construction and project management of Oriental gardens and water features.

Ken holds a bachelor of Fine Arts from the University of New South Wales. He majored in modern landscape painting and abstract steel sculpture with a particular interest in Oriental aesthetics, Japanese sumi-e brush painting, and traditional Chinese landscape ink paintings of the Sung dynasty.  After working as an artist for 10 years, and having successful shows in Sydney and Colombo, Sri Lanka, he embarked on the journey of discovery of Japanese gardens.

With the help of friends and a mentor, within two years he had established Japanese Style Landscapes in Sydney, which in 1984 became Imperial Gardens Landscape Pty Limited and quickly became one of Australia’s leading landscapers specialising in Oriental gardens.

Ken began reading Zen at the age of 18, which led to the exploration of the history and philosophy of the Buddhist, Taoist and Confucian traditions in China and Japan.